The Role of Companies in a Post-Election, Covid Crazy World
Skip to content

The Role of Companies in a Post-Election, Covid Crazy World

Home > Blogs > News > The Role of Companies in a Post-Election, Covid Crazy World

The Role of Companies in a Post-Election, Covid Crazy World

The Role of Companies in a Post-Election, Pandemic Sort of World

According to a recent survey conducted by market research firm, Morning Consult, 56% of American consumers said they “pay close attention to brands’ ethical or political stances,” per data shared with Agency Partner. In the lead up to the upcoming election, we can agree that people are becoming increasingly polarized by the day. For a company, this makes it difficult to understand what role they should play when strong political and social questions hit the table.

So what’s the takeaway for business leaders? How do you go about taking a stand without completely alienating part of your customer base?
The fact is that there is a way to do what you feel is right without turning anyone away. First, let’s turn to the data. So far, the data is telling us that consumers in the United States have changing expectations about what a brand should or should not do in terms of its involvement with things including corporate social responsibility, political activism, and social issues. Gone are the 1980s and 1990s when consumers really only cared to see a brand ensure that products and services were ethically sourced and fulfilled. In 2020, consumers are expecting a lot more!

2020 Emphasizes a Demand For Brands to Align With Social Concerns

At an increasing rate, the American public wants to see brands use their power and influence to positively impact politics and culture. Morning Consult projects that more than 54% of American consumers believe that companies should make an effort to drive change and progress on important social issues. This means taking actions to operate in an environmentally friendly way, promote fairness and equity, ensure a safe and positive work environment, and show more concern for the stakeholders even if it’s slightly to the detriment of the company shareholders.
ln a nutshell, here is a list of items, in order of priority, that consumers feel companies should have some level of influence in:

On the other hand, there is a special distaste for companies that do the following: 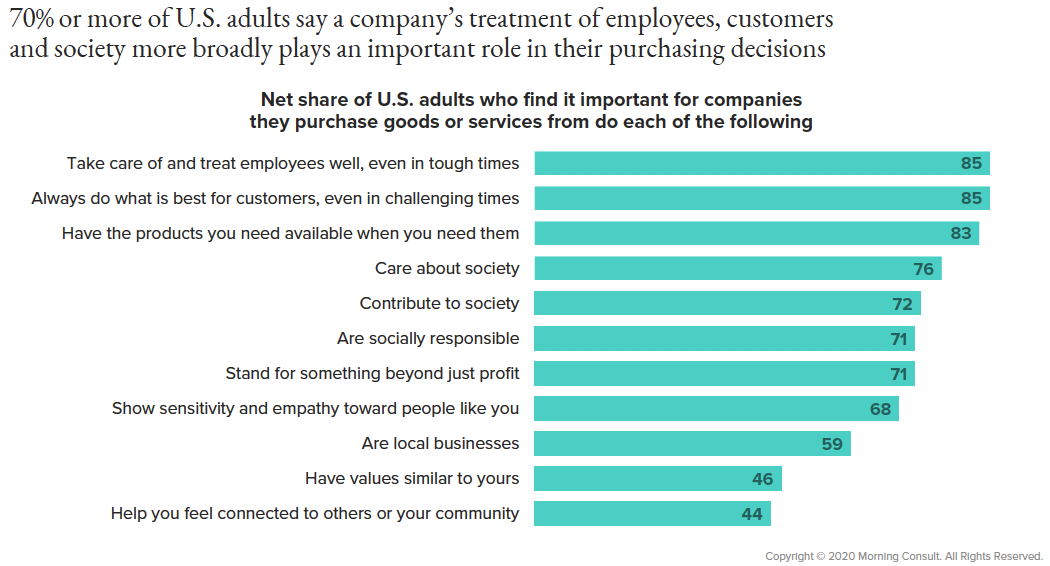 As brands work to promote positive change and fairness, they are generating heightened levels of trust and more often being viewed as charitable, responsible, and accountable.

Interests & Top Issues for Consumers Around the 2020 Election

For the most part, a company will remain in good graces if it makes clear and obvious actions to promote free and fair elections. Noting above that consumers do not care to see the companies that they buy from directly endorse a political candidate, the idea is that businesses should promote fairness, access, and integrity. This has been increasingly difficult as the integrity of information sharing is strongly under review following inconsistent censorship by our social media platforms such as Twitter and Facebook, as well as by the mainstream news media.
Politics aside, there is strong bipartisan support for issues including:

The bottom line is that the survey data indicates that 56% of Americans are paying attention to what companies are doing to involve themselves in ethical and political discussions. Notable is that a majority of this focus is directly on what company CEOs are doing and saying.

How Politics Can Influence a Company

There is definitely some risk involved when you mix politics with anything. The biggest risk is in taking a position and then being exposed for doing something that directly contradicts that position.
We have seen this time and again from companies including Nike, the National Basketball Association, and Uber to name a few.
With all of that being said, more than half of Americans will still buy from a company that offers convenience, quality, and most importantly: it sells products for an affordable, low price. Perhaps that is why Nike is currently valued more today than it ever has been.
If a brand is really looking to turn business away, here are some things that will do so:

The things that generally have little effect in harming a brand include:

So who carries the greatest risk in managing the power and influence of a company?

If you guessed “CEO,” then you’re right on. The data shows that consumers expect CEOs to not only lead their company but as top-level leaders, they should also be a driving force for change in the communities that they do business in. There is overwhelming support for this as 76% of those surveyed expect CEOs to lead American society.
In cases where the CEOs get it wrong, so many times we have seen the public make the demand: “off with his head!”
Recently here in Dallas, that was the case when advertising staple, Stan Richards of The Richards Group made racially sensitive comments that lead him to “fire himself” and allow new leadership to take over and dictate the future of the company and its image. Similarly, Uber’s founder and former CEO Travis Kalanick was pushed aside by its board after a culture of sexism and gender discrimination was allowed to persist. The theme here is that when issues like this hit the headlines, a new captain is almost always called on to right the ship.

What To Be Ready For On and After Election Day

The data shows that 83% of Americans are paying at least some attention to the 2020 election.
The economy proves to be among the highest of concerns in terms of priorities in this election cycle and most voters are concerned about taxes, wages, jobs, unemployment, and government spending. Of course, the coronavirus is right up there! Companies should be taking safety precautions to ensure that employee health and safety is paramount. Voters have covid in full view this year.
So what is the role of a company throughout all of this? While this won’t boost your revenue, it will earn you some favor. On election day, give your employees the time and space they need to go and vote. The American public favors companies that promote free and fair elections. As an employer or manager, do not try and indoctrinate your employees or chastise them if they hold obviously different political views. Be a good neighbor, support their decisions, and encourage a truly free and fair outcome.
Once we get past election day, focus on promoting safety and on growth.
As an employer, do everything you can to retain employees, ensure that they are bought into the effort of delighting your customers, and make an active effort to hire people that you typically would not hire by leveraging tools such as CultureIndex or OptimizeHire. Once you have hired your team and the business machine is humming, take action to ensure that your workplace is truly promoting growth.

Focus on Your StakeholderS

At Agency Partner, we have learned that a truly diverse, inclusive team makes for a much higher quality standard of service. It facilitates more creative and innovative problem-solving, and frankly, it’s the right way to run a business.
Today, American consumers want to work with brands that are more engaged in their communities and less stingy when it comes to bottom-line, owner-centric value creation. Companies should find ways to invest in their communities and employees without discouraging diverse thoughts and backgrounds. The long-term value that is being created will be measurable via better, faster decision-making.

Give Us a Call Today!

Do you want to revamp your current marketing strategy to survive and thrive during COVID-19? Are you searching for ways to improve how your brand connects with the market?
If so, then you’ve come to the right place. Give us a call today at (214) 295-5845 or click here to Get a Free Quote to speak to a member today.

How to Optimize a Landing Page

What is an Email Marketing Specialist and What Do They Do?