Originally published on December 20, 2022 at Newsmax.com, Written by Marisa Herman

In the weeks since billionaire Elon Musk took over as Twitter CEO, he’s instituted a range of decisions — from moderation to site policy to transparency — in rapid succession that has left even some supporters of his $44 billion bid to purchase the social media behemoth scratching their heads.

But even those who question the wisdom of his recent moves warn that you “can never underestimate” the (frequently) world’s richest man who earned his vast fortune building cars that drive themselves and rockets that may one day ferry the first human to Mars.

Musk had been applauded by conservatives and libertarians for shining a light on Twitter’s previously shielded internal machinations, particularly those involving coordination with government entities, censorship of right-leaning accounts, and suppression of news stories. The latest “Twitter files” revelations went public on Monday afternoon.

Much more to The Twitter Files: Covid Editon than this introductory thread.

Some of his subsequent decisions, however, have been more difficult for free speech advocates to square.

Musk has, in recent days, briefly suspended the accounts of journalists who he accused of “doxxing” his location; decided to prohibit linking to several rival sites, including Facebook, Instagram, and Mastodon; and appeared to govern, at least partially, by user poll, with one of the latest surveys asking if he should step down as head of the company.

“Whether Elon Musk is operating according to plan or is making it up as he goes along is hard to tell,” said entrepreneur Jeff Webb, the founder of Varsity Spirit who also serves as senior news editor of Human Events.

But whether the initiatives are spur-of-the-moment experiments or more calculated moves, Webb cautions not to dismiss Musk.

“Just look at what he has done with Tesla, SpaceX, and now Twitter,” Webb said. “You can never underestimate him, regardless of how far out he has planned his next move.”

Musk may have been surprised that more than half of the 17.5 million users who voted felt that he should step down as Twitter CEO when the poll closed on Monday. He hasn’t made any announcements about leadership changes despite vowing to adhere to the poll’s results.

But Webb points out that the poll may also be part of the plan. 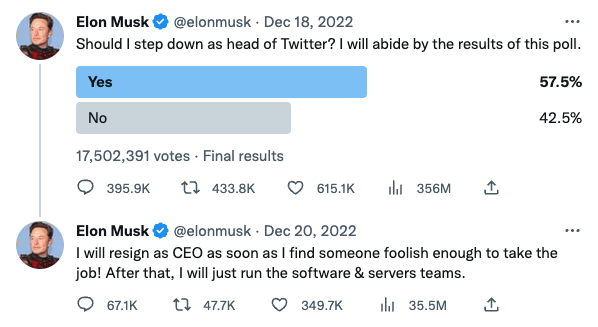 Many people predicted a “transition period” would occur during which Musk would “bring the bias to light and put Twitter on the road to a transparent and fair medium before stepping down for another CEO once he did that.”

“We may very well be at that moment now,” he said.

Jeff Bermant, founder and CEO of Tusk, a free speech-based web browser, agrees that Musk may be inching toward taking on the role of the “big picture guy” and not the “day-to-day guy” at Twitter.

In posting the poll about his future at the company, Bermant said it appears like Musk is “probably leaning toward giving up the CEO role and bringing someone else on,” something which he called a “good business decision.”

Dallas-based digital marketing expert and CMO of Agency Partner Interactive Adam Rizzieri points out that all of Musk’s decisions since his takeover have been aimed at taking private an unprofitable public company that was surviving on “Wall Street’s big bank funny money” so that he could make “drastic changes” that the former management was unable or unwilling to make — and do it “without being called out for breaching their fiduciary responsibilities.”

“The fact is that when a business is actively fixing big problems, smaller problems may pop up along the way, and that’s what we’re seeing with Twitter 2.0,” Rizzieri said.

And with every change Musk makes, he said Twitter users have a rare front-row seat “witnessing a live social experiment.”

Because some experiments are bound to fail, Rizzieri said he expects to see Musk “mitigate loss and allow a quick pivot towards something else that may create value.”

“We will likely see a lot of this, especially as it pertains to fixing Twitter’s policies and community standards,” he said.

As soon as a wide spectrum of Twitter users began to express frustration at the swath of journalists’ accounts being suspended, many of the accounts in question were restored following an online poll by Musk. He also admitted he made a mistake in launching new speech restrictions that banned mentions of rival social media websites.

Despite the negative press and the occasional failed experiment, Rizzieri believes it is “all part of Musk’s greater plan” in creating a free speech platform.

“From day one, Twitter required extensive, expensive changes,” he said. “Since Old Twitter became Twitter 2.0, the organizational chart has been rightfully cut in half, decimating operating costs. And the Twitter Blue revenue channel has been reinvigorated as user growth is hitting all-time highs.

As Musk continues his massive overhaul, Andrew Selepak, a social media professor at the University of Florida, said some of the fallout from his decisions are merely “growing pains” that are “natural to any tech company.”

He notes that Twitter is receiving more scrutiny right now than other social media sites that have gone through rough patches because it is a widely used platform that has existed for a decade.

“[Twitter] is in a very odd position because there’s been a big change on a well-known platform in a short period of time,” he said.

As Musk works out the kinks, however, Selepak said the self-proclaimed “chief twit” isn’t doing himself any favors when he contradicts himself on certain policies, using as an example the recent account bans despite portraying himself as a “free speech absolutist.”

And though Selepak said it appears that Musk is quickly “making up some of these things as he goes along,” Sarah Johnson, a media relations expert, advises that Musk is “much smarter than most of his critics are giving him credit [for.]”

She points out that as Musk sets out to transform the microblogging site into a “town hall forum” where “all voices could be heard,” he has “proven his chops by showing that Twitter can function, and even thrive, without the myriad workers the company once employed, and there’s a night and day difference in terms of transparency.”

While he operates in a manner that “many might describe as a ‘fly-by-the-seat-of-your-pants’ style,” she suspects Musk “wants to make as many changes as quickly as possible.”

She notes that he also “learns quickly from his mistakes or from policies that haven’t always been thought out to the fullest.”

“He owns the mishaps and tweaks the execution until it’s where he wants it to be,” Johnson said. “Overall, the changes he’s implemented in the last two months are staggering.”

Catch Us In the Media

Agency Partner’s award-winning team often contributes expert opinions and perspectives on things that matter. Follow our contributions to the latest news and media topics or head over to the newly reinstated/uncancelled Agency Partner YouTube page to see us on TV and hear us on the radio or podcasts.

If your business is looking to utilize a digital marketing strategy or perhaps you need help with your web design and mobile needs, we’re happy to help! For no risk and no obligation, give us a shot!

Make the team at Agency Partner your next call.

eCommerce Platform vs Marketplace: Which is Right for Your Business?